Climbing is inherently a dangerous sport but in the last decade it has become a lot safer with the advent of bolting. Although bolting has the potential to be safe, if the incorrect bolts are used or the correct bolts are placed poorly, then the bolts could be as dangerous as that shaky piece of trad gear you trusted your life on the other weekend. What’s worse is that another climber will come along a year later and think that a bolt is great as it looks good but, unbeknownst to him, it is actually a poor placement. What's also important is the placement position, as there is nothing worse than a great route with oddly placed bolts that cause rope drag and give you heart palpitations. So if you want to place good bolts that your kids can climb on in 20 years, follow the following golden rules:

Only use anchors and hangers supplied by a reputable supplier.

Bolting epics aren't fun so prepare yourself well. Toprope the route and find the best place to clip the bolts. Think about what you are going to do.

Place a good quality anchor that you can be proud of - don't skimp on a few cents for a crappy bolt.

Below are some more detailed recommendations for people wanting to bolt routes in South Africa:

Essentially there are two types of rock that we use for sport climbing in SA. The super hard quartzite sandstone found at the Restaurant, Magaliesburg, Cedarberg, Cape Peninsula, Montagu and Natal, and the soft sandstone found in Swinburne and Harrismith.

Homemade hangers are out! Buy a tested hanger from a reputable supplier. Most hangers in SA are stainless steel which will prevent corrosion and the associated degradation of the hanger, staining of the rock and the hassle of having to have to replace it in a few years’ time.

For the hard quartzite sandstone it is recommended to use a 10mm stainless steel express (expansion stud) anchor that Hilti and U-pat manufacture. These companies recommend a 90mm long anchor but many climbers have used a 70mm long anchor in SA and these have performed well (i.e. no failures!) U-pat give the Mountain Club cool discounts also.

The express anchor should be placed in the following manner:

For the soft sandstone in Swinburne and Harrismith an express anchor is not suitable as the rock is too soft. Here it is recommended to use a glue-in bolt that consists of a stainless steel stud being held in with a high performance epoxy mortar. U-pat recommend a 110mm deep hole with a 10mm stainless steel rod. The soft sandstone allows you to drill the required 12mm, 100mm deep hole. Both Hilti and U-pat manufacture these systems using a capsule or injection gun.

The chemical anchor should be placed in the following manner:

Lower-off chains should consist of 2x10mm stainless steel chain links welded into a hanger that has been bolted on at the top of the route. 2 links are used as this prevents your rope running badly through the chains. The chains can become quite worn after many years and if you want to prevent common mode failure then you can load the one chain and use the other as a back-up as shown below: 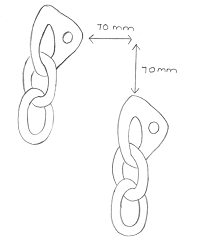 Here are some other useful tips for bolting routes in general: